This is how you shoot yourself

Glock 17 full auto? WIN. Shot thru the hand. FAIL. Overall more win than fail. Get your hand looked at sir. - RRC
Posted by rrc at 7:22 AM No comments:

About: A thriller centered on the threat posed by a deadly disease and an international team of doctors contracted by the CDC to deal with the outbreak.

This movie does many things right. It effectively illustrates how society can (and probably would) break down rapidly. The movie touches on peoples' belief in social media commentary as though its the bible. People will believe information as long as its semi-credible. False information is spread as quickly as fact in this film.

Millions of people die and it is presented in a realistic fashion. Women die. Children die. Men die. No one is immune to the spreading plague.

Camera shots linger on door handles, table surfaces and other commonly touched items that will give you instant paranoia about touching anything long after the movie is over.

All the big name actors make solid performances and the blurry camera work during flashback scenes are very effective. The ending isn't your "everything will be OK nonsense" either. (Day After Tomorrow anyone?)

Man may have drowned trying to get gun 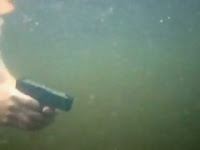 Haverhill police say divers found a Glock semiautomatic pistol Wednesday in the Merrimack River. It was near the spot where the body of 30-year-old Matthew Bleistein of Lancaster, Pa., was found suspended by a rope around his waist on Saturday.

Investigators think Bleistein used with the rope and pulley to hoist himself over a wall.

Police tell The Eagle-Tribune they think he may have dropped the gun in the river at some point and later tried to retrieve it.

Bleistein was in Haverhill to visit his grandmother.

The death remains under investigation.

Holsters....... they can do many things, like holding a gun. Don't drown trying to save your firearms. They can hold their breath alot longer than you. - RRC

Bigger is better when you need to "dispose" of your co-workers car. Thank god they painted a bulls eye or they would never hit it. (sarcasm)

You've probably heard of anti-personnel or anti-tank weapon before. This is an anti-material rifle. I am pretty sure that means the Gepard GM6 Lynx will make you have a really bad day if you are on the business end of it. Makes a great Christmas or Anniversary gift! This would make for a great addition in an upcoming RRC video. Hungary.......are you listening?

The California Legislature adjourned on September 9, but not before sending four anti-gun bills to Governor Jerry Brown (D) for consideration.

• Assembly Bill 144 would ban the open carrying of an unloaded handgun.
• Assembly Bill 809 would require the registration of newly purchased long guns.
• Senate Bill 427 would allow law enforcement to collect sales records from ammunition retailers among other things.
• Senate Bill 819 would allow the DOJ to use the Dealer Record of Sales funds to help pay for enforcement of California firearm possession laws.

On a positive note, Senate Bill 610, which would standardize the application process for a permit to carry a concealed handgun, also made it to the Governor's desk. -

I have a wild idea. Enforce the other thousands of laws on the books and remember that CRIMINALS DON'T OBEY LAWS! -RRC
Posted by rrc at 1:27 PM No comments: 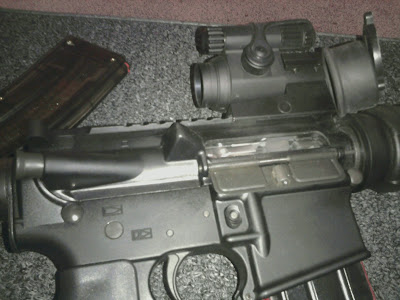 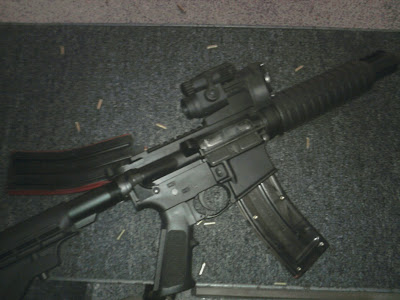 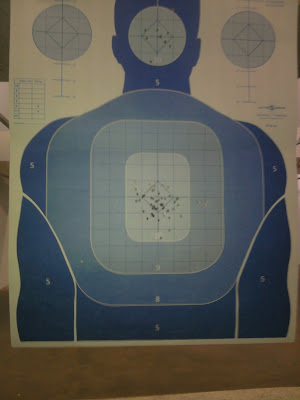 I went to the range to plink with a CMMG .22 conversion kit. They run about $150.00 at Cheaper Than Dirt. The kit easily drops into your AR15 upper with no modifications. The 25 round magazine works great although I wish it were a darker color. I painted mine just to match the rifle better. The "Black Dog" magazines work well too.

The AR15 used is a 1 in 7" twist, 16" barrel. Accuracy isn't as good as a dedicated rifle designed for 22's, however I now have a rifle that can shoot .223 and .22 with minimal investment and it gets the job done. Accuracy should improve with a 3x magnifier mounted behind the Aimpoint red dot sight.

The target pictured above was shot from 35 and 50 yards from a sitting position. Ammo used was Federal. (The WalMart 550 rd box) I must warn you that this kit will not work with Remington Golden Saber bullets and it even states that in the directions. Any other ammo (CCI, Remington, Federal, etc) have worked without issue.

This thing is fun and cheap, just like those girls you went to school with. -RRC
Posted by rrc at 10:05 AM No comments:

Transformers 3. It wouldn't have been a bad movie if they could only get someone to write a decent script. Props to ShockWaves' arm cannon. Is there a waiting period on that at the gun store??? 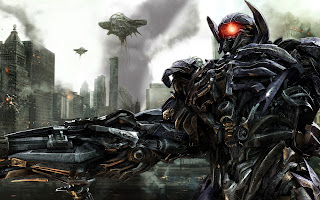 Please help spread the word about Russian Roulette Clothing, next giveaway is at 500 likes! Thanks! #guns #ammo #post-apoc
Posted by rrc at 3:12 PM No comments: Links to this post