Ha ha! This will be required before you know it!

The Man With the Iron Fists Red Band Trailer

Yea I know, what is this doing on RRC Blog? 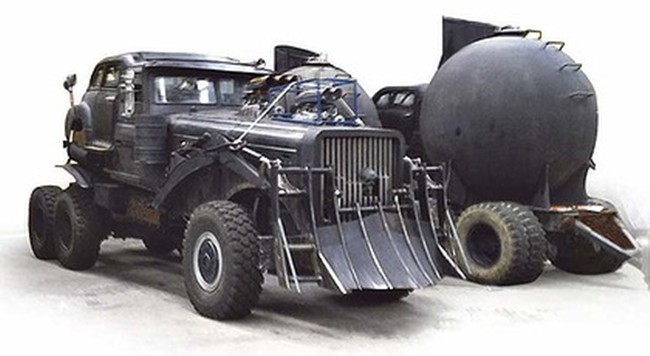 
Director George Miller has finally begun production the long delayed Mad Max: Fury Road, with production shifted to Namibia from Australia, but not without one final change.

Miller was very clear from the outset that his intention was to shoot Fury Road - and presumably back-to-back effort Furiosa, as well - in 3D with customs rigs being developed for the shoot by Dalsa Corporation.

Those plans have now been shelved and while the film will still be screened in 3D it will no longer be shot that way. The production has instead shifted to a blend of Alexa digital cameras with Canon and Olympus DSLRs being used in situations where they might be smashed.


Thanks to TwitchFilm.com for the intel.
Posted by Apoc Matt at 8:43 PM No comments:

Ah that wacky Hitler! So much pent up frustration.

The video has a few typos but it is funny nonetheless. I am a grammar Nazi. Get it? Nazi? Ah ha!

I think Gaston Glock lost his mind after the Gen 3 models. Why fuck with perfection?

Don't answer that.
Posted by Apoc Matt at 9:53 PM No comments:

Thank god no one was hurt. The machine is a beast.

The Buffalo vehicle was designed based on the successful South African Casspir mine-protected vehicle. While the Casspir is a four wheeled vehicle, the Buffalo has six wheels. Buffalo is also fitted with a large articulated arm, used for ordnance disposal. Both vehicles incorporate a "V" shaped monohull chassis that directs the force of the blast away from the occupants.

Buffalo is also now equipped with BAE Systems' LROD cage armor for additional protection against RPG-7 anti-tank rounds. Glass armor is sufficient at 6 inches thickness. Run-flat tires are present in all tires. The Buffalo combines ballistic and blast protection with infrared technology to detect the presence of dangerous ordnance and a robotic arm to disable the explosive ordnance. Personnel operate the Buffalo’s 30-foot robotic arm and claw from within the armored hull via a mounted camera and sensory equipment, to safely dispose of mines and IEDs. 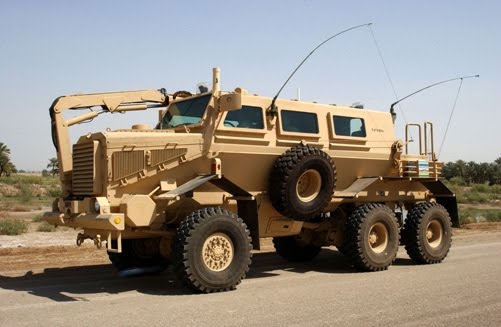 Chicago Shootings Over The Weekend 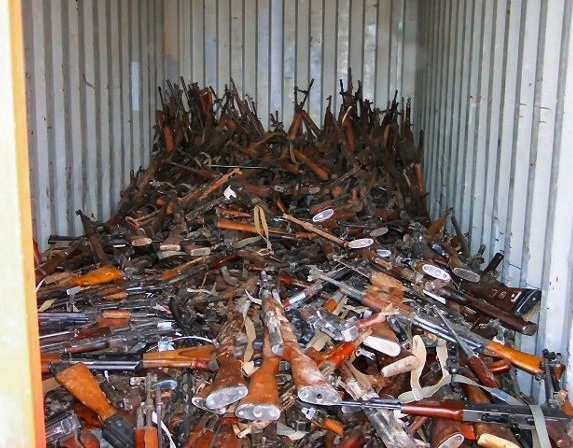 Wow, Chicago folks like to let their guns do the talking.

Read the full story for all the gory details.


A 13-year-old boy was one of two people killed, and 13 other people were wounded, in shootings in the city over the weekend that stretched from Montrose Avenue south to 97th Street, authorities said.

In the shootings overnight, Tyquan Tyler, 13, was at a party with his sister, 19, in the 6200 block of South Rhodes Avenue when a fight broke out about 1:20 a.m., police said. The two ran from the fight but someone pulled a gun and fire, hitting the boy, police said.

Taking Women on Dates to the Shooting Range

I taught my wife to shoot. Bad idea. Now I will just die tired if I run.


Props to MrColionNoir for wearing our "7.62x39mm" shirt.

Get one at Russian Roulette Clothing.

Ever take your woman shooting?
Posted by Apoc Matt at 4:09 PM No comments:


All those magazines have to be heavy! How much weight can the magazine release hold?
Posted by rrc at 10:41 PM No comments:

She has a lot of valid points. Men are dumb. I know, I am one. Leave a comment below. 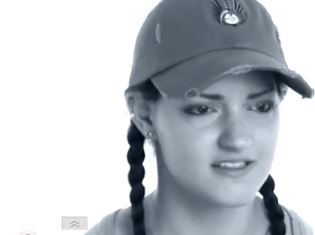 Asking me if I need a spot only works at the gym douchebag!
Posted by Apoc Matt at 7:13 PM No comments:

Tex Grebner shot himself in the leg and he is sick of your shit.


In all seriousness, stay the hell off of Youtube if you are just gonna talk shit. Go do something useful like petting a rattlesnake or inventing a teleporter. Seriously, driving is sooooo 1970. I want instant travel.
Posted by Apoc Matt at 6:56 PM No comments: 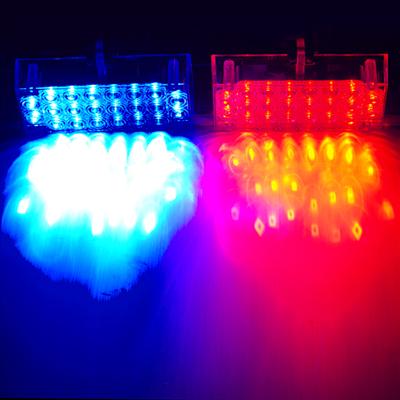 If you hate cops then I guess this is good news?


Police officers in Indiana are upset over a new law allowing residents to use deadly force against public servants, including law enforcement officers, who unlawfully enter their homes. It was signed by Republican Governor Mitch Daniels in March.

The first of its kind in the United States, the law was adopted after the state Supreme Court went too far in one of its rulings last year, according to supporters. The case in question involved a man who assaulted an officer during a domestic violence call. The court ruled that there was “no right to reasonably resist unlawful entry by police officers.”


Police can shoot a man in the back and it will be considered "justified" in Las Vegas, Nevada. In over 20 years I cannot remember one Metro Police shooting that was considered "unjustified" in this town.

Maybe we can get a law where the magazine has a combination lock and crossword puzzle that needs to be solved every time you want to reload.

Just think of all the children you will save! Approximately zero.

Comment below.
Posted by Apoc Matt at 3:33 PM No comments:

I let my CCW expire years ago. I then took the class over and by the time I turned in my paperwork it was expired. Time flies at strip clubs.

That is why I have my crack security team always with me. I call them the "Eastern European Helpful Fun Team."

Track suits are a must for concealed carry.
Posted by Apoc Matt at 5:58 PM No comments:

Skipping a Bullet Across the Water

I read some of the video comments. Youtube safety Nazis relax! Take a deep breath. I really doubt there is zoo full of bald eagles right behind the tree line waiting to be taken out by a .22lr.
Posted by rrc at 5:16 PM No comments:

How much is too much? See the above video.

A couple of suggestions for accessories: 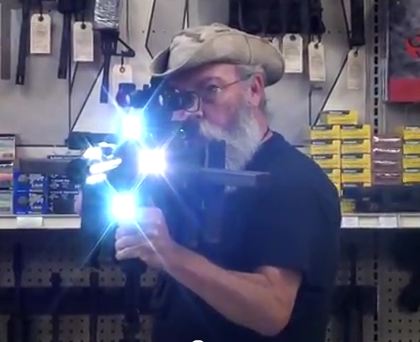 Blinded by the light.
Posted by Apoc Matt at 9:51 AM No comments:

Corrosive Ammo Effects After One Month

Everyone knows that one guy who brags: "I never clean my rifle!"

Usually that guy is always fixing double feeds and stove pipes while I am blasting away. I sold a beautiful Russian SKS and the new owner has never cleaned it.

I can't be bothered to clean my guns either. I like to shoot while drinking my Cognac and smoking a Cuban. After my gun gets dirty I have my "gun butler" fetch me a new one.

My life is hard. 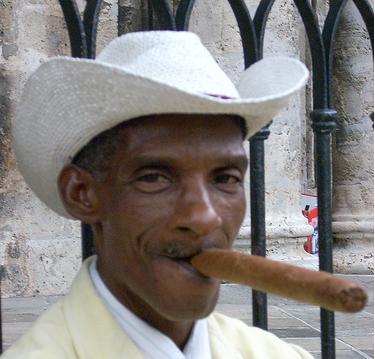 Yep, this is a photo of me nice and tan.
Posted by Apoc Matt at 3:45 PM No comments:

How NOT to Shoot a Revolver

Be happy if you haven't been hit by the "side blast" from a revolver.

Last time I was next to a guy shooting a revolver I thought I caught a ricochet on my arm. After flailing on the ground and yelling "medic!" for 15 minutes I realized what happened. The medic never showed.

This little piggy is about to be shot off!


Who else has been hit by a revolver "side blast"?
Posted by Apoc Matt at 3:33 PM No comments:

Metro 2033 was a great atmospheric game. I never read the books, although I understand they portray the wasteland with incredible detail.


The Moscow Metro. A monumental feat of Soviet engineering, with a dark secondary purpose - to serve as a refuge in the event of an atomic attack. As the Cold War thawed and the threat of nuclear annihilation seemed to fade, this purpose was forgotten -- except by a few, waiting for the signal, ready to open the vaults ... the last refuge for the remnants of mankind. 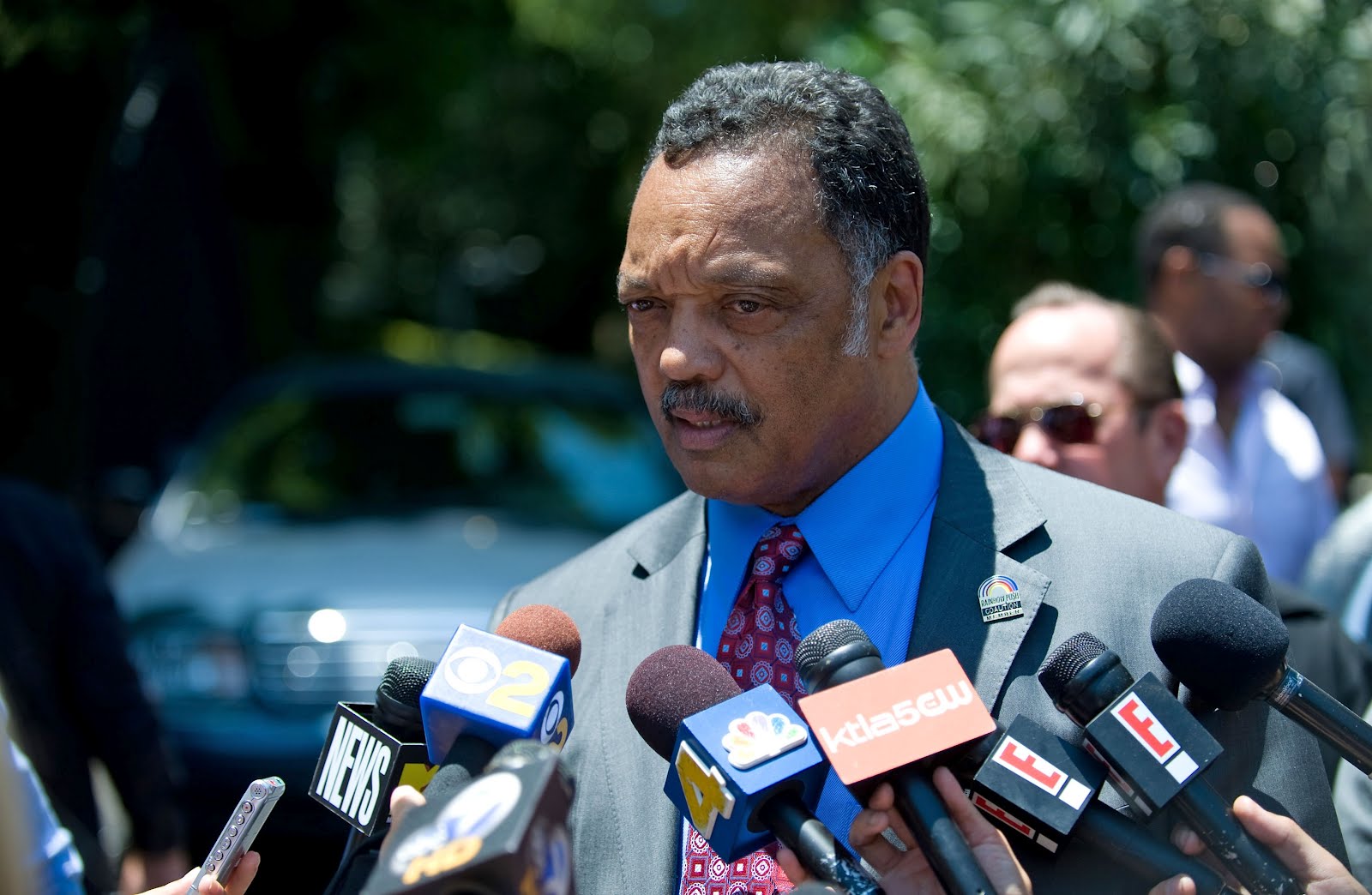 Jesse Jackson held a pre-recall election rally for a small gathering of people in Racine, WI and talks about how gun control helps create jobs. Seriously.

You know what really creates jobs?

1 - Wars.
2 - Not out sourcing call centers.
3 - Building things in America instead of sending 90% of production to China.

Well, according to Jesse, job creation is probably a race issue anyway. *Shrug*.


“June 16th we march, guns out, jobs in. We are fighting a war to protect democracy from insurgents, and the first thing you do is to stop the gun trail, that’s bringing the guns to kill the people.”

I was wrong about my predictions, but at least I know how water affects ammunition.

The ammo was under water for approx. 45 hours. The first part of this experiment can be seen here. The idea was; "Three types of 7.62x39 ammunition get wet. Yugo surplus, a polymer coated and a lacquer coated type. Will they shoot after being wet for hours or even days?"
Posted by Apoc Matt at 9:08 PM No comments:

So this is what nuns wear under their robes! I've been so ignorant.

Honestly, it took a minute to realize this was animation and not real. I winced a few times when Agent 47 was handling business.

Pre-order Hitman: Absolution on Amazon.com or wherever games with dirty nuns are sold.
Posted by Apoc Matt at 8:31 AM 1 comment:

If I had a tank I would ride on the cannon too!

I swear to god, if he gets a hold of an ICBM (nuclear missile) it will be the best video ever. Some people may frown upon that but they are hippies anyway. Go hug a tree hippies!
Posted by Apoc Matt at 7:34 PM No comments:

Usually songs about guns are made by rappers who "load clips" and have "infrared beams". This is much better.

Sorry gangstas, I just can't take you serious when your "9mm gat" is gonna "pop off" and "smoke some fools".

Some differences between the 2 calibers: 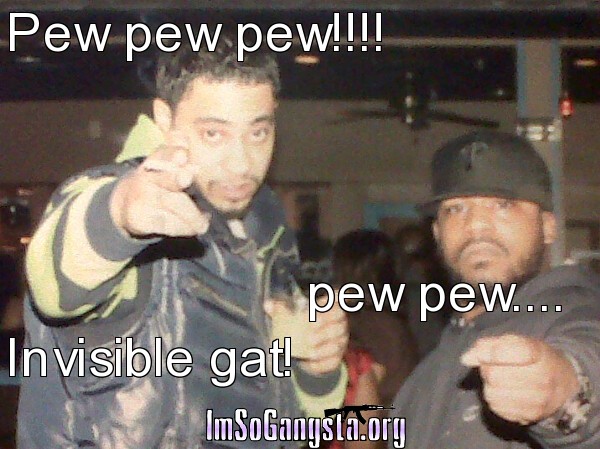 If I ever need to rob a bank or dollar store (hey they have a lot of great stuff there) I'll hit up The Post Apoc.

Looks like the kinks are worked out. Can we get a double beer holder on one of these? 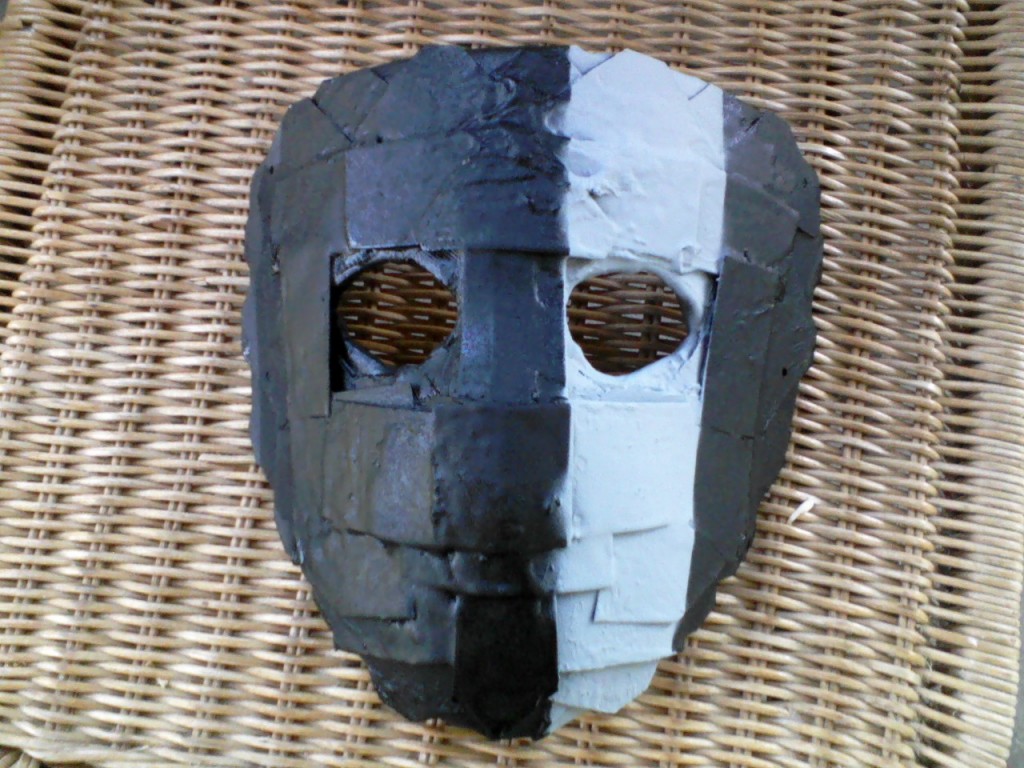 Read the step by step instructions with photos here. Now with more watermelon!
Posted by Apoc Matt at 8:31 AM No comments:

Three types of 7.62x39 ammunition get wet. Yugo surplus, a polymer coated and a lacquer coated type. Will they shoot after being wet for hours or even days?

Leave your predictions in the comments below!
Posted by rrc at 5:46 PM No comments: 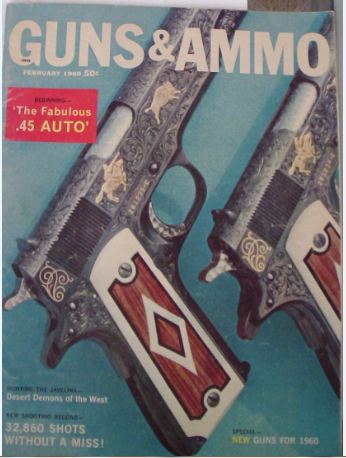 I went to Beatty, Nevada over the weekend and found this little piece of firearm history at a yard sale. 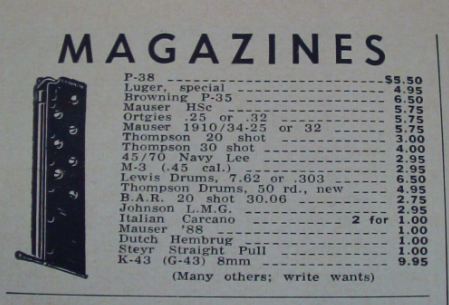 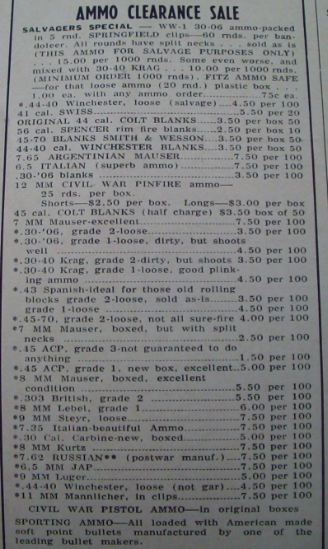 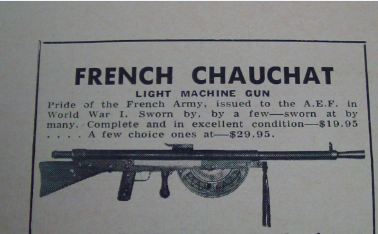 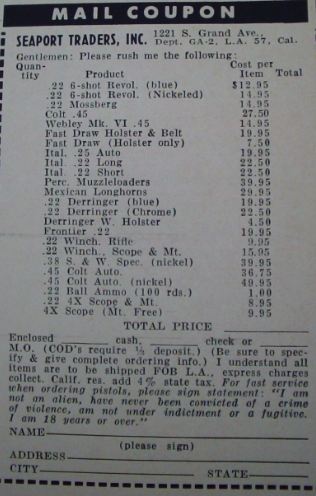 Email ThisBlogThis!Share to TwitterShare to FacebookShare to Pinterest
Labels: 1960, guns and ammo, magazine

A Zombie Apocalypse Would Suck

If you read the Walking Dead comics you would see what hell life would be. Face it, times would suck if any type of apocalypse were to ACTUALLY happen.
Posted by rrc at 9:11 AM No comments: